The Nigerian Gem Hunt, On The Ground (Part 2) 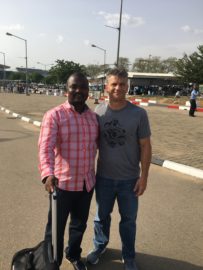 After about 23 hours of travel including a plane change in France, I arrived in Nigeria and the gem hunt began. The first stop was Abuja, Nigerian’s, fairly new and vibrant, capital city. After clearing customs, an official stopped me at the exit. She grabbed my passport and holding it tightly, demanded I give her something. I was definitely caught off guard, like a boxer who just took an unexpected right hook to the chin. I quickly regained my composer and engaged in a ‘friendly’ discourse with her that ended in her returning my passport and me on my way. On exiting the airport, I was warmly greeted by my friends, who promptly hugged me and welcomed me to Nigeria. Along with their greeting came an even warmer greeting in the form of a hot, sub-Saharan wind, charged with a fine dust, courtesy of the Sahara Desert to the north. The drive through the capital to our hotel was as to be expected, heavy traffic, slow speeds and erratic driving especially on the part of drivers of old cars that looked like they had been in the demolition derby more than once. The next morning found us stationed in a downtown African arts and crafts market, where we found an outdoor restaurant table and waited for local dealers to bring us their wares. We looked at Tourmaline, Aquamarine, Morganite and a few Sapphires, none of which really met the standard. Fortunately, there were an abundance of street vendors, 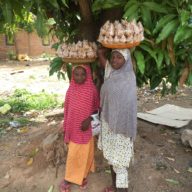 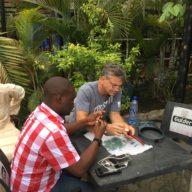 two of which happily kept me supplied with bags of freshly roasted peanuts for 50 Naira per bag, which is about $.13. After a long day of waiting and seeing very little material, we determined that on the following morning, we would head for the city Jos, in the Plateau State, Northern Nigeria’s famous gem center. The next morning, after a slow start, we were on our way. We passed through many small towns, where the main streets were clogged with pedestrians, vehicles and street vendors, selling everything from live goats and chickens to windshield wipers and water. The air is filled with an array of odors ranging from the rich aroma of spices and grilled meat to the choking stench of vehicle exhaust belching from old and poorly maintained vehicles.  Buildings were mostly made of cement or mud brick, many of which were ram shackled and scattered about in a most random fashion. Churches and Mosques were everywhere, evidence of Nigeria’s religious and ethnic diversity. 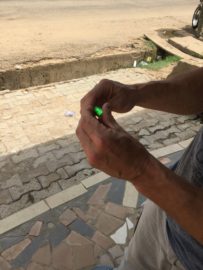 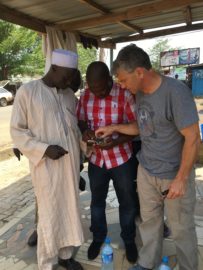 Our first stop was at a minor gem center, where we stood along the roadside and looked at a variety of Tourmalines. It is here that I managed to buy a few choice pieces of fine material that had just arrived from a nearby mine the night before. From there we hurried on in attempt to reach our destination before dark. I soon learned that you don’t want to be on the roads after dark. It is under the cover of darkness that the robbers and kidnappers operate, hiding out in desolate areas, stopping traffic and preying on anyone that they perceive has money or valuables. As we got closer and closer to our destination and as the late afternoon sun gave way to dusk, our journey became increasingly slow, not from traffic, but from military and police checkpoints every 2-3 miles. The military, in recent years, has been doing a great job in bringing stability to a very sketchy area, and I learned to appreciate and respect their work. At the same time, it seemed that every other checkpoint was run by police, routinely drunk, wielding AK-47’s and asking for anything from money to, “Hey, share with me some of those peanuts you are eating.” Again, the best way to handle a drunk police is to play along, not be serious and give him a handful of peanuts! One notable incident happened at a checkpoint where the police on duty said. “Hey white man, you are under arrest.” I couldn’t help but burst out laughing, to which he replied, “Why are you laughing?” Obviously seeing the humor of his silliness, he then he said, “How do you like the weather here?” It told him that I loved Nigeria and the weather, to which he waved us on. So off we were to our next stop. (continued in part 3) 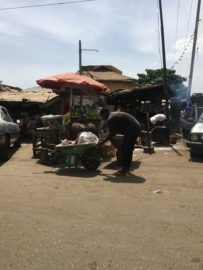 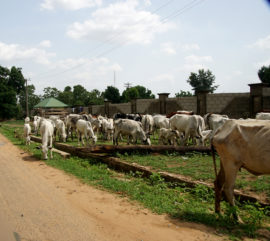 Ever Present Herds of Cattle 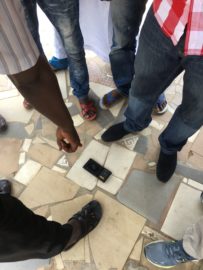