Ruby – The King of Gems

Ruby – July’s birthstone, is one of the most ancient and rare gemstones. In Sanskrit, ruby is ratnaraj, meaning the king of gems. 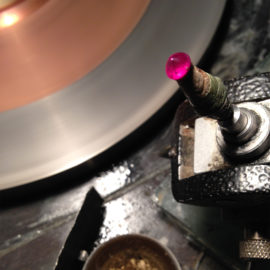 Here is a gem quality ruby, ready for the cutting wheel. Most of our gems are faceted in-house by our own gemstone artists.

Click Here for Details on This Amazing Pair of Burmese Rubies

Ruby can command the highest price of any colored stone.

For example: One of the most expensive ruby rings ever sold was, The Sunrise Ruby and Diamond Ring by Cartier and it sold for $30,335,698.00.

Ruby is clearly, one of the most important gems in the colored stone market, often with carat prices far exceeding that of diamond.

What is a Ruby?

Rubies are part of the corundum mineral species, which include both ruby and sapphire.

In its purest form, the mineral corundum is colorless.

Trace elements that become part of the mineral’s crystal structure cause variations in its color. Chromium is the trace element that makes a ruby red.

While rubies can vary in color from a pinkish red, to an orangish or purplish red, the most valuable color for a ruby is a rich pure red.

The strength of ruby’s red depends on how much of the trace element, chromium is present—the more chromium, the stronger the red color. Chromium can also cause fluorescence, which adds to the intensity of the red color.

The most famous source in the world for ruby is Myanmar (Burma).z

So what makes one ruby more valuable than another?

It’s all about the four c’s. 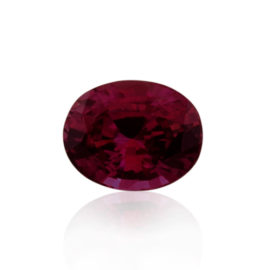 Above: A 1.02ct, fine Burmese Ruby. Click here for details

While very few people understand what this means, treatments can affect the price tremendously.

So here is some background.

Heat treatment is when the rough gems are placed in a kiln and heated to a fairly high temperature for a period of time. The net result can enhance the color and or clarity of the rough gems. This means that a dull, silky, sleepy gem may now sparkle and be far more vibrant and suitable for setting in jewelry.

There are other treatments out there which can range from oiling and dying, to glass fracture filling. In the case of glass, fracture filling, gems of very low quality (fish tank material), are heated along with leaded glass. The many fractures are thus filled, and gives the gem the appearance of being a fine quality ruby. Buyer beware! This practice can be very difficult to detect, for those who are untrained.

Sadly, many have bought expensive rubies only to later learn that their precious gem is virtually worthless.

So, if you are in the market for such an important and fine gem, such as ruby, it is very important that you choose a trustworthy source to buy from. Look for a legitimate jewelry store that has a good reputation. Stores who are members of prestigious organizations such as AGTA, Jewelers of America, American Gem Society, Preferred Jewelers, IJO and RJO are all good bets. Happy gem hunting and I’ll see you on the next blog.