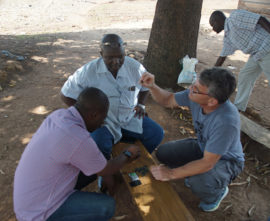 After a couple of hours driving along a fairly smooth road, we arrived at the village. After a brief stop to look at a few parcels of Sapphire under the shade of a mango tree, we jumped on motor bikes to head to the mining site. The path weaved along a narrow lane, past mud brick houses before heading through open fields which consisted of freshly tilled plots of land that gave off an earthy smell. 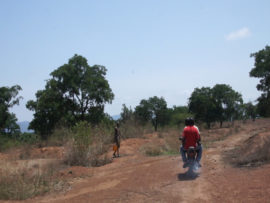 Heading to the Sapphire mine

The land had been recently sewed with vegetable seeds in anticipation of the approaching rainy season. On arriving at the mining site we saw about 50 men or so, spread about the area.

Some were hauling up buckets of dirt from the depths below, others were taking shelter from the hot sun, under various trees, still others were washing bags of gem bearing gravel or sitting in the sun picking through the fine gravel in search of Sapphire and Zircon. To watch the 4 minute, full gem hunting video, click here! 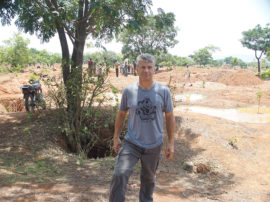 We came to one gem pit and carefully peered into the depths. It appeared completely black and I could barely make out a faint light at the bottom, probably from one of the miners headlamps. Half jokingly, my friends asked me if I wanted to go down, to which I hesitatingly said yes. There was no ladder, just a rope for hauling up the dirt in buckets. This meant that I would have to use the grooved hand and footholds in the sides of the walls to descend. I had previously experienced this kind of an arrangement in Cambodia, at the Blue Zircon mines of Ratanakaria, however I was not yet sure that I was up for this one. I had a headache and was beginning to feel a little bit weak. It was probably just the heat. Little did I know of the malaria parasites that were rapidly multiplying somewhere in my system. Well, with all those eyes watching, what was I to do? Swallowing my fear I went for it! So I carefully got my footing and began the 40ft descent. It wasn’t as bad as I thought. The footholds were firm and the descent smooth. Even though there was a rope present, it offered no comfort since it was simply there as a way to haul up the buckets of dirt. As I descended further and further down, it got markedly cooler and darker. At the bottom, apart from being dark, narrow and very damp, it was quite peaceful. A welcome respite from the heat and loud chatter above. 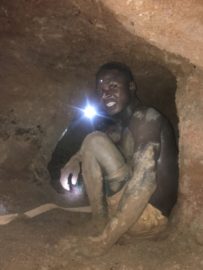 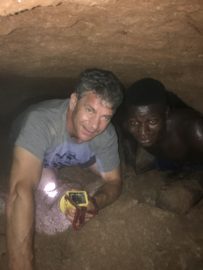 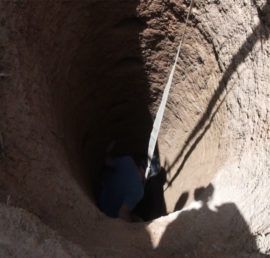 I presently found two young miners digging a horizontal shaft which I followed. On arriving at the end, one of the miners brought my attention to where he was digging. He showed me how he had found the layer of dirt, about a foot thick, that appeared different from both the layers above and below. That reputedly was gem bearing mud and rock. He was digging out this section and preparing it for hauling to the surface. After about 15 minutes of talking with my new friends and taking photos, I headed back up. Back on top, I was greeted by a small crowd of locals who had come to see the crazy foreigner who had chosen to climb down the mine shaft. It felt great to enter their world, even if for just a moment.  Although I could never really share their lives, their struggles and their excitement in such a short time, I felt a sense of deep appreciation for what they go through in bringing their gems to market. Finally, we proceeded to where the gem bearing dirt was being processed. I learned how it was washed to remove excess mud and then washed again until only the fine gravel remains. This would then be poured out on the ground, ready to be picked through in search of Sapphire and Zircon crystals. Finally, we headed back to the village where we cleaned up and headed on our way. That night we were to stay in Kaduna city, where hopefully more parcels of gems awaited us. (continued in part 5)